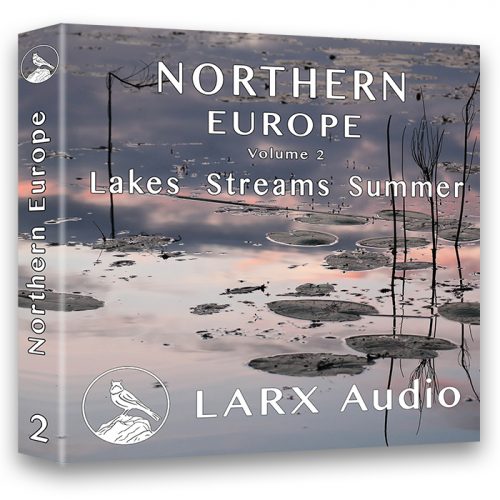 This second volume comprises 71 quad surround ambiences of the hot summer at the national park in Karelia. Carrying you away into the land of Mother Nature, untouched with technogenic and anthropogenic sounds. Busy morning of birds and insect in a marsh, streams in forests and a beaver’s dam, a rapid roaring river in a canyon. Mystically whispering and aggressively chattering winds through reed. A swallow feeding their nestlings in front of the microphone. Still evening over lakes with echoing voices of a Hobby falcon, Arctic Loon calls and splashy takeoff runs. Otherworldly silent night with Longhorn beetle larvae creaking communications in the trees at the shore, a bat at 30 kHz and a large beetle cruising around the mic like a helicopter with rumble down to infrasound.

10% of the library revenue goes to nature preserves and animal shelters.

PURCHASE
This is an astonishingly well recorded and curated library. Highly recommended.

This release continues the series of pure nature surround ambiences. The challenge was to produce everyday forest, meadow, lake and other natural soundscape libraries, free from anthropogenic and technogenic noise. I found such area without air traffic or highways within dozens of kilometres around, driving through forests 100 km deep by dirt roads. Then it took backpacking on foot and then going on a rowboat over lakes to get to the areas lost in swamps, where no car or motorboat or human voice sound reaches. There were a few abandoned small villages around, but the last inhabitants left them in 1970-s. The clarity of the soundscapes and absence of ubiquitous low rumble was overwhelming.

I aimed at making the final product ready for spotting into your timeline, being sure that no additional editing is needed on the user’s side, except the creative placement and manipulation of sounds. Editing and mastering was done in my professional 5.1 calibrated mixing room. The level of the monitoring was set at 79dBc and the files were mastered in such a way that they sound a bit louder than in reality, making the library convenient for use in cinema and broadcast productions. Absolutely no denoising or whole-file processing was applied, only gentle lowpass filter against wind rumble. All the single close clicks from grass or branches, that could distract the viewer’s attention, were surgically removed with Izotope RX 7 Advanced. The result is 71 quad surround files or 5 hours 43 min total play time. Most of the files are 4-6 minutes long. Some are consecutive recordings of 2-3 files, each file with it’s distinctive character, that can be joined together seamlessly. The microphone is strictly symmetric, so you can use all channels, choose any channel or a combination of channels.
The files are embedded with rich Soundminer and BWF metadata including WAVE markers pointing at interesting events in the files and visible in Soundminer, Reaper, Izotope RX and other DAWs, a CSV file with exported Soundminer metadata is included for import into other sound librarian applications. The special metadata feature of this library is that the Soundminer “Artwork” field contains the photos of the corresponding recording locations taken at the moment of recording. A folder with the photos in jpg format is also included for those who don’t use Soundminer.